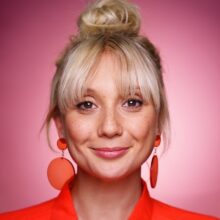 Jenny Bede is a writer, actor, and comedian.

In 2017 she won the BAFTA Rocliffe Award for new comedy writing and was named The Observer’s Rising Star. An award-winning musical comedian and actress, Jenny first gained a following on YouTube by writing, directing and performing in a series of topical parody music videos. In 2013, Jenny started performing live solo material, entering the Musical Comedy Awards and winning Best Newcomer after just 3 live gigs.

She currently has writing projects in development with BBC Studios, CPL and BEANO. Jenny has written and performed three solo Edinburgh shows, the most recent of which was in the 25 best reviewed comedy shows of 2019.

She recently performed her new show 'Jenny Bede: The First Pregnant Woman in the World' at the 2022 Edinburgh Fringe Festival.