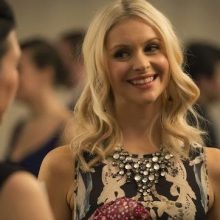 Hulu’s miniseries is based on the 1994 British film of the same name.

Much like its ’90s parent film, the series ‘Four Weddings and Funeral’ follows four American friends who reunite for a fabulous London wedding. But after a bombshell at the altar throws their lives into turmoil, they must weather a tumultuous year of romance and heartbreak.

Relationships are forged and broken, political scandals exposed, London social life lampooned, love affairs ignited and doused, and of course, there are four weddings…and a funeral.

See the wonderful Jenny Bede and fantastic Miranda Hennessy in ‘Four Weddings and a Funeral’ available on Hulu now.