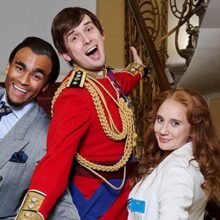 Written by and starring Kieran Hodgson as Prince Andrew himself, with original music co-written by Freddie Tapner, the story centres on the key events, relationships, and controversies of Andrew’s life, including a reimagining of the former-HRH’s bombshell interview with Emily Matis in which the man behind the headlines faces the music.

This is a hilarious, all-singing, all-dancing reimagining of the Duke of York’s very public fall from grace….

Watch L&C’s brilliantly funny Jenny Bede as Fergie in ‘Prince Andrew The Musical’ on Thursday 29th December at 9pm on Channel 4 and All4.