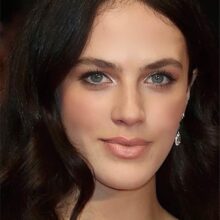 Jessica Brown Findlay is a London based actor.

After training at ArtsEd London, she quickly won her first role in the British comedy drama 'Albatross'.

She played Ophelia to Andrew Scott’s 'Hamlet' in Robert Icke’s Olivier nominated production, which transferred from the Almeida to the West End, and can currently be seen in 'Munich: The Edge of War' (Netflix) and in John Crowley’s 'Life After Life' (BBC).

Jessica will next be seen as the lead in the film adaptation of Jo Nesbo’s 'The Hanging Sun' which premiered at this year’s Venice Film Festival, as well as the highly anticipated television series 'Flatshare' (Paramount+).

The Yellow Wall Paper (US accent)