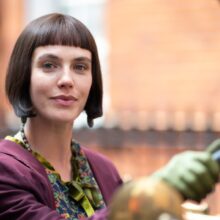 In 1941, Ursula says goodbye to her brother Teddy as he heads off to war. What if? She asks him. What if you could live your life over again?

In 1910, Ursula is born for the first time to Sylvie and Hugh Todd. She dies at birth. Ursula is then born for the second time. This time, she survives. Ursula’s birth sparks a thrilling journey as she dies and is reborn, time and time again, living through tumultuous change and two world wars… trying, each time, to get it right.

Based on the best-selling novel by Kate Atkinson, this compelling story follows Ursula as she navigates each new life, through a critical era which spans two world wars, an encounter with Hitler and major life events. But what is it that Ursula so desperately needs to stay alive for?