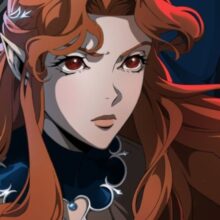 Based on the Japanese video game of the same name, ‘Castlevania’ follows monster hunter Trevor Belmont as he battles against Count Dracula’s army of demons, who are hellbent on the destruction of humanity.

Together with Dracula’s son Alucard, magician Sypha Belnades and various allies they make along the way, Belmont hopes to defeat the army and protect the people of Wallachia.

Jessica Brown Findlay is Lenore; a diplomat member of the Council of Sisters, put in charge of subduing Dracula’s henchman Hector.

‘Castlevania’ is streaming now on Netflix.