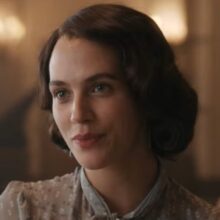 On the eve of World War II, Hitler plans to invade Czechoslovakia. Nations rush to find a peaceful resolution without the prospect of war, and Britain recruits a civil servant, Hugh Legat, to journey to Munich to gather intelligence and avert disaster.

He’s soon reunited with his now-estranged Cambridge friend, Paul von Hartmann, a German diplomat who drifted from his life after supporting the Nazi party. Together, they form a tentative alliance on the brink of catastrophe…

Don’t miss L&C’s superb Jessica Brown Findlay as Pamela Legat in this gripping dramatisation of one of the key turning points in modern world history.

‘Munich: The Edge of War’ is streaming now on Netflix.