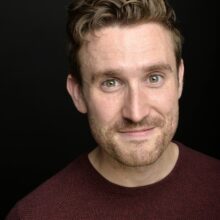 - Brendan Murphy performs his new show ‘Buffy:Revamped’ at the Edinburgh Fringe - EDINBURGH FRINGE ALERT!! See Brendan Murphy in ‘Friend’ (The One with Gunther) - ‘Total War: WARHAMMER II’ Is Out Now Featuring An Array Of Loud And Clear’s Fantastic Voices - The Fantastic Brendan Murphy stars in ‘King Kong (A Comedy)’ now showing at The Vaults in London.

Brendan Murphy is a London based actor, improviser and comedian.

He graduated from Arts Ed London with a BA Hons in Acting before going on to train in improvisation with Second City and Improv Olympic alumni, David Shore and The Free Association. He was nominated for the Spotlight Prize in 2008.

An experienced improviser, Brendan is a member of BBC Radio One's BattleActs! and has been a guest player for Second City and Monkey Toast Players. He has written and performed several solo comedy shows including 'BAGMAN' and 'Enter The Bagman'.

Last year, Brendan performed 'FRIENDS' parody show 'FRIEND' (The One With Gunther) at the Edinburge Fringe. He's about to bring his latest show 'Buffy: Revamped' to the Pleasance for the Fringe 2022.

Visual - Friend: The One with Gunter | Trailer