The Fantastic Brendan Murphy stars in ‘King Kong (A Comedy)’ now showing at The Vaults in London. 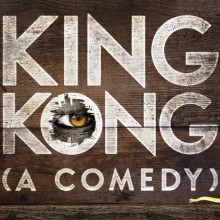 Brendan Murphy stars in the fantastic new show ‘King Kong (A Comedy)’ showing at The Vaults in London now.

This play is a brilliant comic remake of the classic film, King Kong which was released in 1933 after the successful ‘King Kong’ novel. This hilariously funny reimagining of the novel was written by Daniel Clarkson and directed by Owen Lewis. The play is based at the Vaults in waterloo which gives the show a really unique and quirky feel from the start.

On Tuesday evening we went along to see the brilliant Brendan Murphy staring in the show. Brendan played a few different quick witted hilarious characters which made the whole audience chuckle with laughter throughout the show. In this show we follow the cast as they make the journey to the undiscovered land in search of the famous Kong.

The cast were all excellent in their roles with lots of quick impressive costume changes and some hilarious puppetry work. The 80 minutes of family friendly comedy really is a summer must see!

You can buy tickets in the link below: http://www.kingkongcomedy.com/