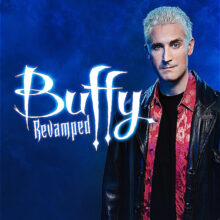 The entire 144 episodes of cult 90s TV show, ‘Buffy the Vampire Slayer’, as told through the eyes of the one person who knows it inside out: Spike.

Satirical, funny and bursting with pop-culture references, it’s the perfect parody for Buffy aficionados and those who never enrolled at Sunnydale High alike.

New show from Brendan Murphy, winner of the Worldwide Comedy Award for Best New Play for Friend. **** (Stage – for Friend). ‘Murphy is a master of his craft.’ (ThePlay’sTheThingUK.com) ‘Indefatigable comedian and improviser.’ (Fest).

Do not miss L&C’s inimitable Brendan Murphy in his new show ‘Buffy Revamped’ as part of the Edinburgh Fringe at the Pleasance @ EICC from 4-29th August.