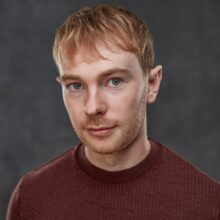 Siôn Alun Davies is a Welsh actor based in London.

Born and raised in Cardiff, Siôn is a fluent Welsh language speaker.

He graduated from the Guildhall School of Music and Drama in 2012 and has worked consistently on stage and TV since then. Notable stage work includes 'A Soldier and a Maker' (Barbican), 'Outside on the Street' (Pleasance/Arcola), 'Velocity' (Finborough), 'The Lady from the Sea' (Welsh National Theatre) and 'My People' (Clywd Theatr Cymru).

Cage of Souls by Adrian Tchaikovsky