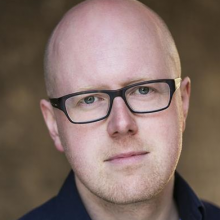 Rich Keeble is a London based actor, comedian and presenter.

He has co-written an award-winning comedy web series, and written or appeared in several other online comedy videos and podcasts, as well as performing live stand up, sketch, and improvised comedy at the Edinburgh Fringe.

Rich recently filmed a guest role for Series 3 of Idris Elba’s Sky sitcom 'In The Long Run' . He also recently appeared in Martin Clunes’ BBC1 sitcom 'Warren' where he portrayed 3 different characters - the radio host in Episode 4, and both the Shop Assistant and Taxi Operator (on the phone) in Episode 6.

Other television credits include 'Porters' (Dave) 'Inside No.9' (BBC2), 'The Rebel' (with Simon Callow, UKTV Gold), 'The Delivery Man' (with Paddy McGuinness, ITV) and 'Birds of a Feather' (ITV)

Rich can currently be seen starring in indie film 'Criminal Audition' on Amazon Prime, ITunes and Sky Store and the second season of 'The Emily Atack Show' (ITV2)