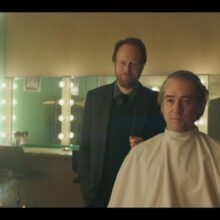 In the late sixties, John Stonehouse’s political career is booming – but during these successes, Stonehouse is also forging secret relationships, first with Czech spymaster Alexander Marek and then with his new secretary Sheila Buckley.

Marek makes him an offer and Stonehouse is more than happy to trade information for money, which Stonehouse spends lavishly – but the 1970 election proves to be a turning point as Stonehouse, when Labour loses power and he’s left out in the cold by Marek and the media.

Stonehouse hatches a secret plan to escape his dire circumstances that involves a dead constituent and forged passports. A ministerial trip to Miami is the perfect opportunity – but can he bear to leave his family, and the real John Stonehouse, behind?