30/40's Neutral, Confident/Versatile/Natural
← back to men 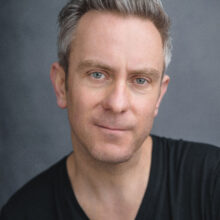 Jonathan Rhodes is a London based actor.

His roots lie in the Cambridgeshire market-town of St Ives; while he trained at Dartington College of Arts and the Birmingham School of Acting, before moving to London in 2000.

He works across television, theatre and film; most recently on the period-drama 'Belgravia' (ITV & Epix); on the comedy 'Trying' (Apple TV+); and on the BBC Studios drama 'Motherfatherson' with Richard Gere. He also appears in the second series of 'The Crown' (Netflix); and the US TV show 'Dominion'.

Recent feature film credits include 'Misbehaviour' and 'Hysteria'. Jonathan also appeared in the BBC comedy 'Life's Too Short' and the Sky1 sitcom 'Parents'.

He also enjoys the opportunity to create his own work. The bone-dry satirical short film 'Big Society' has won several awards; and the super-short 'School Portrait' scored one million views in ten days and was nominated for a Webby.

As well as voicing the audio book 'Death in the Cove' by Pauline Rowson and her subsequent novels, Jonathan has a huge list of voice-over credits; prestigious stage roles and random commercials to his name.