20/30's Northern, Confident/Wry/Recognisable
← back to men 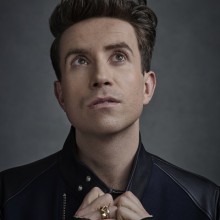 Nick Grimshaw is a London based Northern radio and TV presenter.

Nick is the host of the Radio 1 Drive Time Show.

In 2006 Channel 4 spotted Nick and at the age of 22 he was signed up as a presenter for E4 Music and the Channel 4 morning show Freshly Squeezed. With his easy charm, pop culture knowledge and confidence in front of the camera he soon established himself as one of the UK’s hottest young talents.

Having cut his teeth in national broadcasting at Channel 4, Nick was next signed up by BBC2 where he co-hosted three series of their youth music show Sound, alongside Radio 1’s Annie Mac. Their chemistry proved a winner and Nick joined Annie on Radio 1 hosting the Sunday evening Switch youth strand – the show became a huge hit with listeners.

2008 saw Nick given his first solo Radio 1 show as host of the Weekend Breakfast Show. Then in 2009, he was offered the prestigious 10pm – midnight new music slot Mondays to Thursdays, which he presented for three years until taking over the reins of the station’s flagship Breakfast Show.

Nick’s TV career has grown alongside his radio work. 2014 sees Series 4 of his panel show “Sweat The Small Stuff” for BBC3. He has presented Radio 1’s Annual Switch Live / Teen Awards since 2009, co-presented the BBC’s Children In Need alongside Sir Terry Wogan and fronted numerous shows for Channel 4 including, The Mercury Music Awards, Style The Nation, NME Awards coverage and Orange Rockcorps. He has also hosted Channel 4’s The Album Chart Show and co-presented T4

As well as his broadcasting duties, Nick is an Ambassador for the men’s fashion industry in the UK and his presenting skills are also regularly called upon, with hosting duties for the Elle Style Awards and the BRITS nomination awards.

September 2014 saw the release of Nick’s first curated compilation album: “Radio 1’s The Nixtape”. Based on the massively popular Friday hour long segment of the Radio 1 Breakfast Show, The Nixtape showcases the fusion between Nick’s own encyclopaedic pop knowledge, the preferences of his guests and those of his Radio 1 listeners across the country.