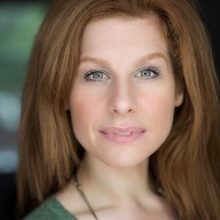 Cassidy Janson is a London based actress.

She most recently starred in new West End musical 'And Juliet' at London's Shaftesbury Theatre.

Her many theatre credits include 'The Man of La Mancha' with Kelsey Grammer at the London Coliseum, Ruth in 'Dessa Rose' at the Trafalgar Studios, 'Candide' and 'Tick Tick Boom' for the Menier Chocolate Factory, 'Blood Wedding' at the Courtyard Theatre, 'Rooms: A Rock Romance' at the Finborough, 'Lend Me a Tenor' at the Gielgud Theatre and Kate Monster/Lucy the Slut in 'Avenue Q' at the Wyndhams Theatre. Cassidy was a member of the original London cast of 'Wicked' and played standby Elphaba.

Cassidy wowed West End audiences with her powerhouse performance in the title role of 'Beautiful: The Carole King Musical'.

Her film credits include 'The Hike', 'Tail’s End', 'Day Trip to London', 'Full Circle' and 'Coma'.  She guested with The Jive Aces at Glastonbury, Ronnie Scott's plus a tour of New York City and Florida.

She won an Olivier Award in October 2020 for Best Actress in a Supporting Role in a Musical.

Beyond the Deepwoods Bridget Jones Diary