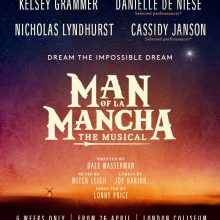 Miguel de Cervantes, failed playwright, poet and tax collector, has been thrown in jail by the Spanish Inquisition for daring to tax a monastery.

Awaiting trial Cervantes is hailed before a kangaroo court of his fellow prisoners; thieves, cutthroats and trollops who propose to confiscate his meagre possessions one of which is the uncompleted manuscript of a novel called “Don Quixote.” Cervantes, seeking to save it, proposes to offer a novel defence in the form of entertainment.

As Cervantes and his servant transform into Don Quixote & Sancho Panza, his wild imagination leads them into a campaign to restore the age of chivalry, to battle evil and right all wrongs…

Loud and Clear’s sensational Cassidy Janson stars in “Man of La Mancha” at the London Coliseum from 26th April to 8th June.