20/30's Irish, Universal/Compelling/Cool
← back to women 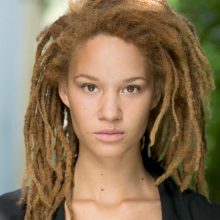 Ayoola Smart is an Irish actor based in London.

She graduated from East 15 in 2016 and has since won numerous prestigious TV, film and stage roles.

She can currently be heard as Niamh, in the new audiobook adaptation of the 2000 AD Comic 'Sláine' (Penguin Random House), as well as featuring in new Irish drama 'Smother' (RTE/Alibi).