Watch Emma Cunniffe in ‘A Ghost Story For Christmas: The Mezzotint’ & ‘Agatha Raisin’ this Christmas 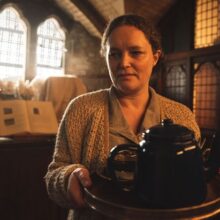 1923. Edward Williams, gentleman and amateur golfer, lives an untroubled life as the curator of a small university museum. His speciality is the topography of the British Isles. So when an art dealer sends him details of an interesting engraving – a mezzotint – of an old country house, he’s intrigued.

When the picture arrives, however, it seems perfectly ordinary – until Williams notices a figure in the picture where there was none before. A cloaked figure, with a skull-like head and legs that are horribly thin. Soon, within the mezzotint, the figure seems to be on the move across the moonlit lawn towards the house with murderous intent.

Emma can also be seen in ‘Agatha Raisin: Kissing Christmas Goodbye’ on Acorn and Sky Max from 20th Dec.