30/40's Northern, Reassuring/Warm/Natural
← back to women 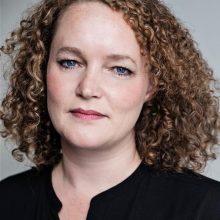 Emma Cunniffe is a London based Northern actor.

She has worked consistently in television, theatre, film and radio drama.

She has performed extensively for BBC Radio 4 drama and is a regular audiobook reader; works include 'Road to Lautrec', 'Caesar Price Our Lord', 'Rival Queens' by Kate Williams and several novels by Cara Hunter - including 'No Way Out', one of The Times audiobooks of 2019.

She has performed on stage at Regent's Park Open Air Theatre, The National, The Old Vic, Donmar Warehouse, The Rose, Menier Chocolate Factory, Regents Park Open Air Theatre, Trafalgar Studios, Hampstead, The Arcola and Glasgow Citizens. She has performed many times for the RSC and The Royal Exchange Theatre in Manchester. She starred as the titular role in 'Queen Anne' for the RSC and West End.