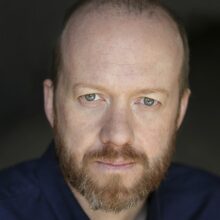 Steve Oram is a London based actor, comedian, writer and film-maker.

He has a background in live comedy and has toured with Steve Coogan. He also regularly performs his live show ‘Club Fantastico’ in London with comedy partner Tom Meeten.

He has performed both comedic and serious roles in numerous TV and Film projects. His breakthrough project was ‘Sightseers’, a multi-award winning dark British comedy following the exploits of a caravanning serial killer couple. Steve’s self-penned directorial debut 'Aaaaaaaah!' was released in 2015. It is a dystopian comedy in which everyone in the cast speaks like apes.

Steve can currently be seen opposite Parminder Nagra in new ITV drama 'DI Ray' (ITV), as well as new indie movies 'Phantom of the Open' and 'Mind-Set'

How To Steal Pigs Race To The Pole Party Paramedics