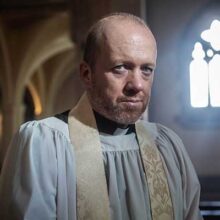 The fourth and final series of Killing Eve returns to BBC iPlayer. Eve is on a revenge mission against The Twelve. She has a lead – Helene and needs to track her down via one of her assassins.

Villanelle wants to change and be good, so she endears herself to a church community. Carolyn, relegated to an embassy role by MI6, is focused on getting back in the game.

Loud & Clear’s fantastic Steve Oram is Phil the Vicar; suspicious of Villanelle’s intentions and a bit fed up with her ‘holier-than-thou’ act… Watch Steve in ‘Killing Eve’ – available now on BBC iPlayer & BBC1.

You can also see him in Simon Farnaby’s new film ‘Phantom of the Open’ released in UK Cinemas on 18th March.