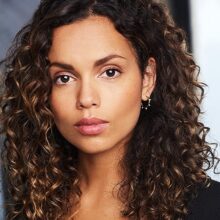 Georgina Campbell is a London based actor.

A native Northerner, Georgina won the BAFTA for Best Actress in 2015 for her performance in the dramatised true story 'Murdered by My Boyfriend' (BBC3).

As well as being the co-lead in DC series 'Krypton', her other notable credits include the critically acclaimed episode of 'Black Mirror - Hang the DJ',  Will Sharpe's dark comedy 'Flowers' (C4), 'Philip K. Dick's Electric Dreams' (C4), Guy Ritchie's 'King Arthur: Legend of the Sword', 'Broadchurch' (ITV) and 'Tripped' (E4).

Georgina can be seen starring in the sleeper horror hit of 2022 'Barbarian', available on Disney+

Visual - BBC3 Murdered by My Boyfriend