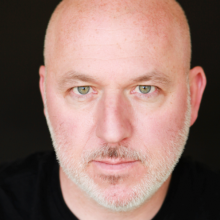 Dominic Carter is a London based Liverpudlian/Northern actor.

Dominic trained at RADA and has worked widely in theatre film and television; he is best known for his recurring role as Janos Slynt in 'Game of Thrones' and DC Hooch in 'Coronation Street'.

Other notable appearances include 'Murdered for being Different', 'Endeavour', 'Guilt' and Jimmy McGovern's 'Moving On'.

He can been seen in and Sherlock Holmes spinoff 'The Irregulars' (Netflix).