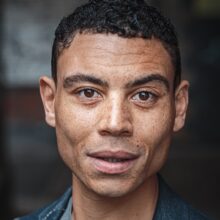 David Judge is a Manchester based actor, writer, playwright and performance poet.

He trained with East 15 theatre school and the National Youth Theatre.

His recent theatre credits include playing Tybalt in the National Theatre/Sky Arts feature film of 'Romeo and Juliet'. He played Lysander in Manchester's Homeground's theatre production of 'A Midsummer Night's Dream' directed by Sean Holmes, and he recently appeared as Don John in the National's 'Much Ado About Nothing'.

He has written several plays including ‘SparkPlug’ (Home/BOTTC/Sky Arts) in which he also performed and toured the UK as well as being shown on Sky Arts, ‘To My White Best Friend…’ (Royal Exchange Theatre) ‘ChatBack’ (National Theatre).

David's first play 'Skipping Rope' was shortlisted for the Alfred Fagan Award and 'Panlid' was commissioned by Talawa and the Royal Exchange.