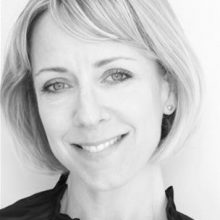 Claudie Blakley is an English actress based in London.

She trained at the Central School of Speech and Drama. In 1998, she won the Ian Charleson Award for her performance in 'The Seagull' at the West Yorkshire Playhouse in Leeds. She was most recently on stage at at The National in Nina Raine's 'Consent' and 'Stories'.

Claudie is best known for her role as Emma Timmins in the BBC drama series 'Lark Rise to Candleford'. Other notable period roles include Mabel Nesbitt in Robert Altman's Oscar-winning 'Gosford Park', Charlotte Lucas in Joe Wright's 'Pride and Prejudice' and BBC's 'Cranford'.

Recent screen credits include 'The House', 'Manhunt', 'Flesh & Blood', 'The Kid Who Would be King', 'Bright Star', 'Grantchester', 'The Driver' and 'What Remains'.

The Year Of Surprising Acts Of Kindness Bridget Jones