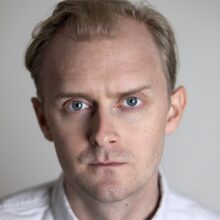 Christos Lawton is a London Based Actor.

Originally from Dorset, he was classically trained at Drama Centre London.

He can be seen in the regular role of George Hodgson in Ridley Scott's anthology TV series 'The Terror' for AMC/BBC2.