Christos Lawton and Chris Corrigan feature in much anticipated TV outing of the Ridley Scott’s produced ‘The Terror’ on BT TV at 9pm on 24th April. 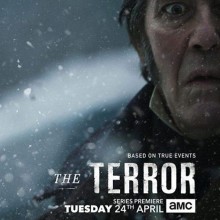 ‘The Terror’ is an American horror drama television series based on the 2007 best-selling novel of the same name by Dan Simmons.

In 1845, the Royal Navy set sail on the HMS Erebus and the HMS Terror to complete a crossing of the Northwest Passage, trying to make it through a blanket of ice in the Arctic. However, misfortunes at sea, including a sailor falling gravely ill and an accident on deck, cripple the expedition 200 miles away, and the captains have to make a risky decision in order to continue their voyage.

The ships are soon stuck, frozen and isolated, and those aboard must survive the harsh weather conditions and each other, while being stalked by an elusive menace.