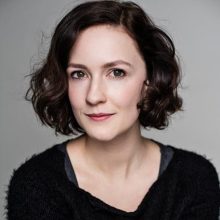 Charlotte Hamblin is a British actor and writer based in London.

She trained at RADA on the Foundation Course and studied English, Drama with Education at Cambridge University.

Charlotte's theatre credits include 'Strings' (Royal Court Upstairs), 'Miss Julie' (Jermyn Street Theatre/Theatre by the Lake- Off West End Nomination- Best Female), 'After the Dance' (Theatre by the Lake), 'For Those Who Cry When They Hear the Foxes Scream', Oleanna (Tristan Bates Theatre), 'Dry Land' (Jermyn Street Theatre), 'Yarico' (London Theatre Workshop), 'As You Like It' (Oxford Shakespeare Company).

She can be seen as Patricia Trehearne in WW2 drama 'Operation Mincemeat' in Cinemas now.