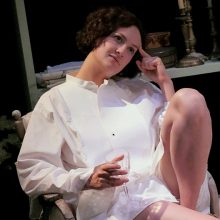 A night when the sun doesn’t set. A night of drinking and dancing. A night to break the rules.

When Julie finds herself alone on her father’s estate, she gate-crashes the servants’ party. In the sultry heat of that long, light night, she finds herself in a dangerous tryst with her father’s manservant, Jean. A flirtatious game descends into a savage fight for survival…