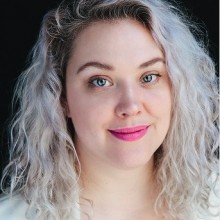 Bubbly and bright, Becca specialises in creative and dynamic characters, from toddlers to Grannies, teenagers to heart throbs.

She is known for her creative performances and energetic range in animation. Along with her work in cartoons and video games, Becca has shown a softer side with cool and focused commercial delivery, as well as audiobooks.

Becca can be heard opposite Joseph Fiennes as America Jara, in the new audiobook adaptation of the 2000 AD Comic 'Judge Dredd: America' (Penguin Random House).