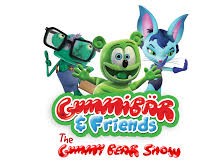 Becca Stewart busts out her karate voice skills as Kala the martial arts kitty in the brand new “Gummibär and Friends: “The Gummy Bear Show” exclusively to YouTube.

“Gummibär and Friends: The Gummy Bear Show” is a brilliantly funny web series that follows the silly adventures of everyone’s favorite gummy bear character and his friends Kala the cat (Becca Stewart) and Harry the chameleon.

Gummibär is the most popular animated character on the internet and the most viewed independent music artist on YouTube ever! He’s green, jiggly, and cute! He sings in over 25 different languages and has released CDs and DVDs in more than 40 countries! He has achieved platinum and gold status in more than 10 countries world-wide where he has reached the top of the music charts.