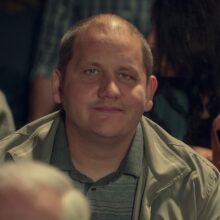 ‘After Life’ follows local newspaper journalist Tony as he comes to terms with the death of his wife Lisa from breast cancer.

Determined to take his anger out on the world, Tony succeeds only in making his friends and colleagues pity him. Only widow Anne, who he meets at the local graveyard, is prepared to offer him home truths about his behaviour.

We join Tony Way as Lenny to wish a fond farewell to the most watched British comedy of the decade.

‘After Life’ Season 3 launches on Netflix on Friday 14th January.