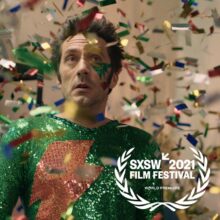 It should have been the best day of Paul’s life. He was all set to enter the local heats of an X Factor-style national talent competition… this was his big chance.

Dood had everything: a sparkly suit, a killer routine, and his dear old mother in tow. But the actions of five selfish people cause Paul to miss the audition, ruining his day, his chance at fame and killing his mother, whose old heart just couldn’t take the stress.

Now Paul plans deathly revenge on the people who got in his way: one lunch break, five spectacular murders. Each wrongdoer dispatched in a fitting manner by the sparkly suited Paul on a revenge rampage around a small town. Will he pull it off and will he find the fame he’s always longed for…

The super-talented Tom Meeten and Katherine Parkinson star in this deadly funny comedy which premieres at SXSW Film Festival later this month.