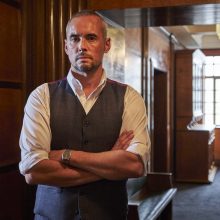 This latest series will see the detectives tackle brand new murder cases, but it’s the one mystery David can’t solve that continues to haunt him. In a dramatic plot twist, detectives will begin to think the unthinkable: did the Detective Inspector murder his wife?

Steve John Shepherd guest stars as Adrian Cook; an old acquaintance from David’s past who he encounters during an investigation. What information does he have about David’s wife?