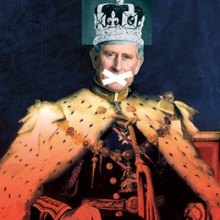 Loud and Clear’s very talented Sally Scott takes on the role of Princess Diana in the brilliant ‘King Charles III’ in London’s Wyndams Theatre in the West End from 22nd Dec 2014 for 6 weeks.

Charles and his family gather following the funeral of Queen Elizabeth II. He then holds his first weekly audience with the Prime Minister, principally discussing a new bill for statutory regulation of the press. This has passed the House of Commons and the House of Lords and is only awaiting Charles’ royal assent to become law. Charles, however, expresses doubts that the law restricts the freedom of the press too much and would allow governments to censor the news and prevent legitimate uncovering of any abuse of power by the government.

Prince Harry has begun a relationship with a republican named Jess and both Charles and Prince William have seen the ghost of Princess Diana, promising each man that he will become “the greatest king of all”.

Protests begin across the country and especially in London. Charles increases the army guard at Buckingham Palace, offers his protection to Jess (who the media have made the centre of a sex scandal) and agrees to Harry’s wish to become a commoner. The Duchess of Cambridge plans a solution, which turns out to be William publicly offering himself as a mediator between parliament and his father. He announces this at a press conference without his father’s knowledge and consent.

Don’t miss this excellent play with the wonderful Sally playing along side another Loud and Clear Voice – Adam James.