Sally Scott Stars in the Watermill’s Sense and Sensibility 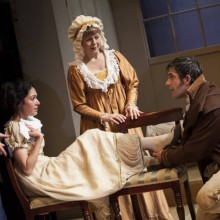 Sally Scott takes to the stage as Elinor Dashwood in Jessica Swales adaptation of the nations favourite love story ‘Sense and Sensibility’ at the Watermill in Berkshire.

‘Elinor and Marianne Dashwood are left penniless after their wealthy half-brother cheats them of their fortune. They are forced to leave the comforts of Norland Park and relocate to a cold Devonshire cottage. When a devilishly handsome stranger arrives at Barton Cottage with the rain-drenched Marianne in his arms, the Dashwood girls are convinced that their fortunes are changed forever. Whilst the sensible Elinor pines for quiet Edward Ferrars, impulsive Marianne loses herself in the idea of her hero on horseback, and for a girl who feasts on poetry and music, what else is there to do in Devon but dream of rescue?’

With many great reviews the show has been a big hit, The Good Review had this to say: “This charming stage version… a welcome addition to an ever-growing list of Austen-inspired creations, looks certain to be a success.” ****

Catch Sally at The Watermill in Berkshire until 10th may.

Sally is available during the day so if you need a gentle, versatile voice over with a good ear for accents then give us a call.