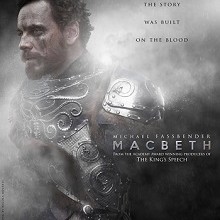 Our brilliant Scotsman Ross Anderson stars as Rosse in ‘Macbeth’ which is on general release from 2nd Oct.

Macbeth, a Thane of Scotland, receives a prophecy from a trio of witches that one day he will become King of Scotland. Consumed by ambition and spurred to action by his wife, Macbeth murders his king and takes the throne for himself.

In this 2015 version of the famous William Shakespeare play ‘The Tragedy of Macbeth’ is directed by Justin Kurzel and written by Jacob Koskoff, Todd Louiso and Michael Lesslie.

The film stars Michael Fassbender in the title role and Marion Cotillard as Lady Macbeth with Ross starring as Rosse.  Rosse is the Thane who brings Duncan news of the Norwegian invasion and of Cawdor’s complicity in it.

The film was selected to compete for the Palme d’Or at the 2015 Cannes Film Festival.