Precious Mustapha is back in the latest season of ‘Fate: The Winx Saga’ 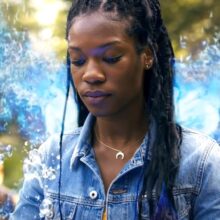 A dark cloud has descended over Alfea College, as Headmistress Rosalind took over after murdering her predecessor Farah.

Meanwhile, Silva has been arrested for the attempted murder of Andreas, who is very much alive after surviving the battle of Aster Dell where he supposedly died 16 years ago. Andreas’s return will leave a lot of problems for son Sky, who also believed him to be dead until minutes before the end of season one…

From creator Brian Young, ‘Fate: The Winx Saga’ follows the coming-of-age journey of five fairies attending Alfea, a magical boarding school in the Otherworld where they must learn to master their powers while navigating love, rivalries, and the monsters that threaten their very existence.