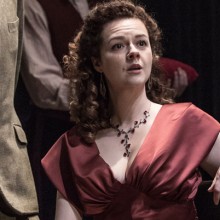 The King of all Shakespeare’s plays, ‘King Lear’ opened at the Royal & Derngate in Northampton on April 5th with Loud and Clear’s Catherine Bailey playing Goneril and Michael Pennington as Lear.

Playing at the Royal & Derngate until April 25th the show then heads out on a national tour.

Already receiving rave reviews don’t miss this special outing of one of the Bard’s most famous plays.