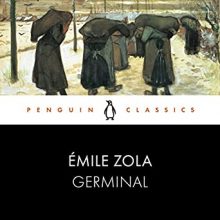 April 23rd sees the launch of a new audiobook collection of Penguin Classics.

Considered by André Gide to be one of the 10 greatest novels in the French language, ‘Germinal’ narrated by Josh Dylan, is a brutal depiction of the poverty and wretchedness of a mining community in Northern France under the second empire.

One of the foremost achievements in Western literature, Homer’s ‘The Iliad’, narrated by Steve John Shepherd while in lockdown, tells the story of the darkest episode in the Trojan War. At its centre is Achilles, the greatest warrior-champion of the Greeks, and his refusal to fight after being humiliated by his leader, Agamemnon…

These epic audiobook titles are available from Audible & Apple Books.