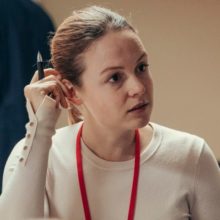 4 March 2018. Emergency services descend on Salisbury’s city centre where they find Sergei and Yulia Skripal unconscious on a park bench.

They are taken to hospital, where doctors struggle to diagnose the source of their illness. DS Nick Bailey decides to investigate the Skripals’ home, but soon after returning to work he begins to feel ill.

Tracy Daszkiewicz, Director of Public Health for Wiltshire Council, is called into an emergency meeting, where it’s revealed that it was an attempted assassination with an unidentified poison. Tracy realises the potential danger and locks down the main sites but, when CCTV footage shows the Skripals have been all over town, she fears the entire city centre could have been infected with an unidentified toxin…

See Loud & Clear’s fabulous Kimberley Nixon as Hannah Mitchell in ‘The Salisbury Poisonings’ – which will air across 14, 15 and June 16 on BBC1 at 9pm.