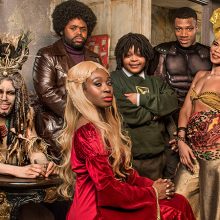 BBC Three comedy show ‘Famalam’ will return for a third series and a one-off Christmas special which will feature new sketches, as well as favourite moments from the past two series.

Earlier this year, our very own multi-talented Akemnji Ndifornyen, an actor, writer, producer and composer, won a BAFTA Craft Award for Breakthrough Talent.

Series one was nominated for a Screenwriters Award in 2018 and the show has recently been nominated in the best comedy series category at the Edinburgh TV Awards 2019. Catch AK and the rest of the crew in the ‘Famalam’ Christmas Special on Monday 23rd Dec, 11.05pm, BBC1.

You can also see him in new comedy drama ‘Shrill’ available on BBC iPlayer.