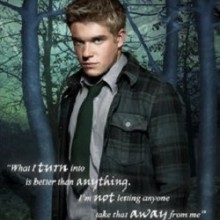 Bobby Lockwood returns as Rhydian Morris in the BAFTA award winning CBBC teen drama ‘Wolfblood’.  Being a teenager is hard enough. Being a Wolfblood teenager is ten times more complicated.

Bobby also won the children’s BAFTA for his role in the show.

Bobby has had a busy summer filming the 3rd series of the smash hit drama along with performing to top scores in the BBC1 Saturday night show ‘Tumble’ which finishes on 13th Sept.