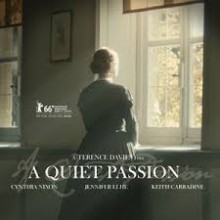 Catherine Bailey stars as the flamboyant Vryling Buffam  in ‘A Quiet Passion’ which arrives In cinemas on Friday 7th April.

A Quiet Passion is a 2017 biographical film directed and written by Terence Davies about the life of American poet Emily Dickinson. The film stars Cynthia Nixon as the reclusive poet and Catherine Bailey  as their very outspoken friend Vryling Buffam.