20/30's Welsh, Expressive/Bright/Playful
← back to women 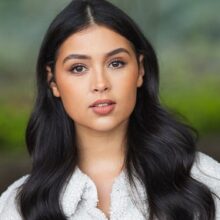 Her roots are Yemeni, Jamaican and Welsh, and she was born and grew up in Cardiff. She speaks moderate Welsh, Spanish and is learning Arabic.

She studied at a young age at The Royal Welsh College of Music and Drama in ‘The Young Actor’s Studio’ for two years. She then went on to become a member of the National Youth Theatre of Great Britain and then furthered her training at Identity School of Acting.

Zadeiah can now be seen on BBC and Hulu’s BAFTA winning series ’In My Skin' where she plays series regular Poppy in both seasons. The show went on to win ‘Best Drama” at both the ‘Royal Television Society Awards and BAFTA Cymru Awards. It has just been nominated for a second best drama RTS.

Her other TV credits include 'Emerald City' (NBC) and ‘The Bastard Executioner’ for FOX.

Betty Campbell – Statue for a Heroine