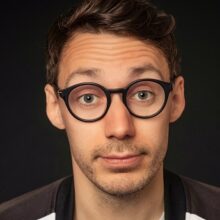 Tom Deacon is a London based comedian.

He has been performing live stand-up for the last 12 years – with four Edinburgh solo shows under his belt – and has been the host of his own TV, radio and online shows on BBC2, Radio 1, The Capital FM breakfast show and YouTube football channel Copa90 – where his Eurofan escapades have notched up over 8 million views.

A journey into the world of Esports led Tom to host on the Sky F1 channel for the first ever F1 esports tournament series. Currently in its third season, the first season final took place during the Abu Dhabi Grand Prix of 2017. He also hosted the first ever ERacing with Zwift championship on BT sport.

He has also hosted Gfinity’s Elite series for all 4 seasons, which included the 2019 Fifa Global Series qualifiers.

Tom being a huge sports fan, was delighted to become the matchday host at Saints FC. He records ‘Ice The Kicker’ NFL podcast and appears on the Nat Coombs Show for ESPN. Tom has also made guest appearances on BBC2’s The Rob Brydon Show, Dave’s One Night Stand and ITV2’s Fake Reaction.