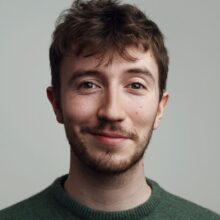 Sebastian Humphreys is a London based actor.

Born and raised in London, Sebastian graduated from LAMDA in 2020 headfirst into the pandemic. Despite this, Sebastian has accrued a number of credits, most recently in voice as multiple characters, including Dennis the Menace, Gnasher and Professor Von Screwtop for ‘The Beano’ (Harper Collins), as well as on stage in Pulp Rocket’s production of ‘The Angry Musician’ as Tom.

Sebastian is probably best known for his role as Billy Grainger in Digital Drama’s ‘Peace in Our Time’ which went on to win gold at the New York Festival’s radio awards.

Having spent significantly too long talking to himself over the years, Sebastian has a knack for character voices.