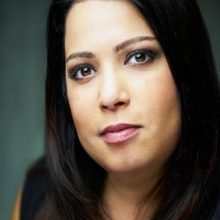 Sara Novak is a London based actor and singer.

She grew up between LA, Sydney and the UK. She has a mixed ethnic background with Caribbean, Mediterranean and Caucasian roots.

Sara is a versatile and experienced actor, spoken-word artist, singer, songwriter and rapper. After studying acting and improv in LA, Sara attended the Central School of Speech and Drama in London.

She has recorded Spoken Word projects for several broadcasters. She also records production music, and has recorded 'in the style of' a vast list of artists including Cardi-B, Nikki Minaj, Little Simz, M.I.A and Charlie XCX. She is also an experienced videogame voice artist and released works include 'Cyberpunk 2077', 'Tom Clancy's The Division 2' and  'Lego Batman 3: Beyond Gotham'.

Sara can be heard as multiple characters in all of the new audiobook adaptations of the 2000 AD Comics including 'Judge Dredd: America' and 'Halo Jones' (Penguin Random House).