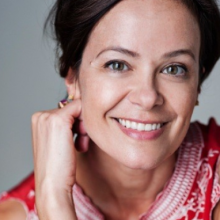 Rosina Carbone is an actor & one half of comedy double act "Saints of Humour"; co-written, performing & compering around the North West.

Rosina started life off as a secondary school teacher - where she quickly developed a sense of humour & rhino hide.

Though hailing from the East Midlands, she is now based in Manchester & can be currently heard on Radio 4's quirky comedy series "Shedtown" where she resumes the role of Diane for the third & final series.

Other credits include ‘Creeped Out' a new ‘spooky’ teen drama for CBBC/DHX/The Family Channel - the style of which is along the vein of 'Stranger Things’.  Earlier this year Rosina has co-written & performed ‘Witch’, a new piece inspired by the Pendle Witches as part of Bolton Octagon’s ‘REVEAL’ season.

She's a series regular in CBBC's '4 O'Clock Club' and will soon be seen in Sally Wainwright's 'Gentleman Jack' and Gareth Tunley's 'Cold Call'.